HOME Sustainability Efforts Regarding Material Issues Material issue 1: Contributing to the Future of the Earth and Its Regions through Environmental Awareness Climate Change Mitigation and Adaptation

Use of Plant-derived Biomass Plastic Containers with Environmentally-Friendly Designs

Since April 2007, we use the Plant-derived biomass plastic (PLA) is used for the containers of our mainstay salad products.

We are working to further reduce our CO2 footprint by using recycled PET materials made from used PET bottles for the containers of our chilled noodles. 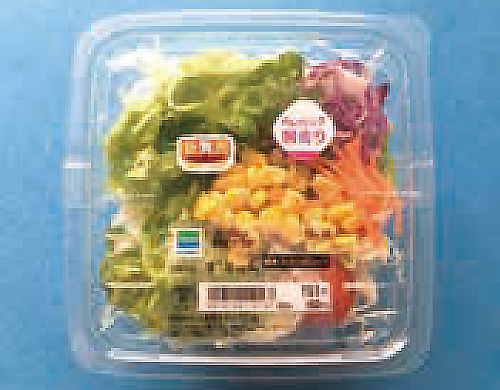 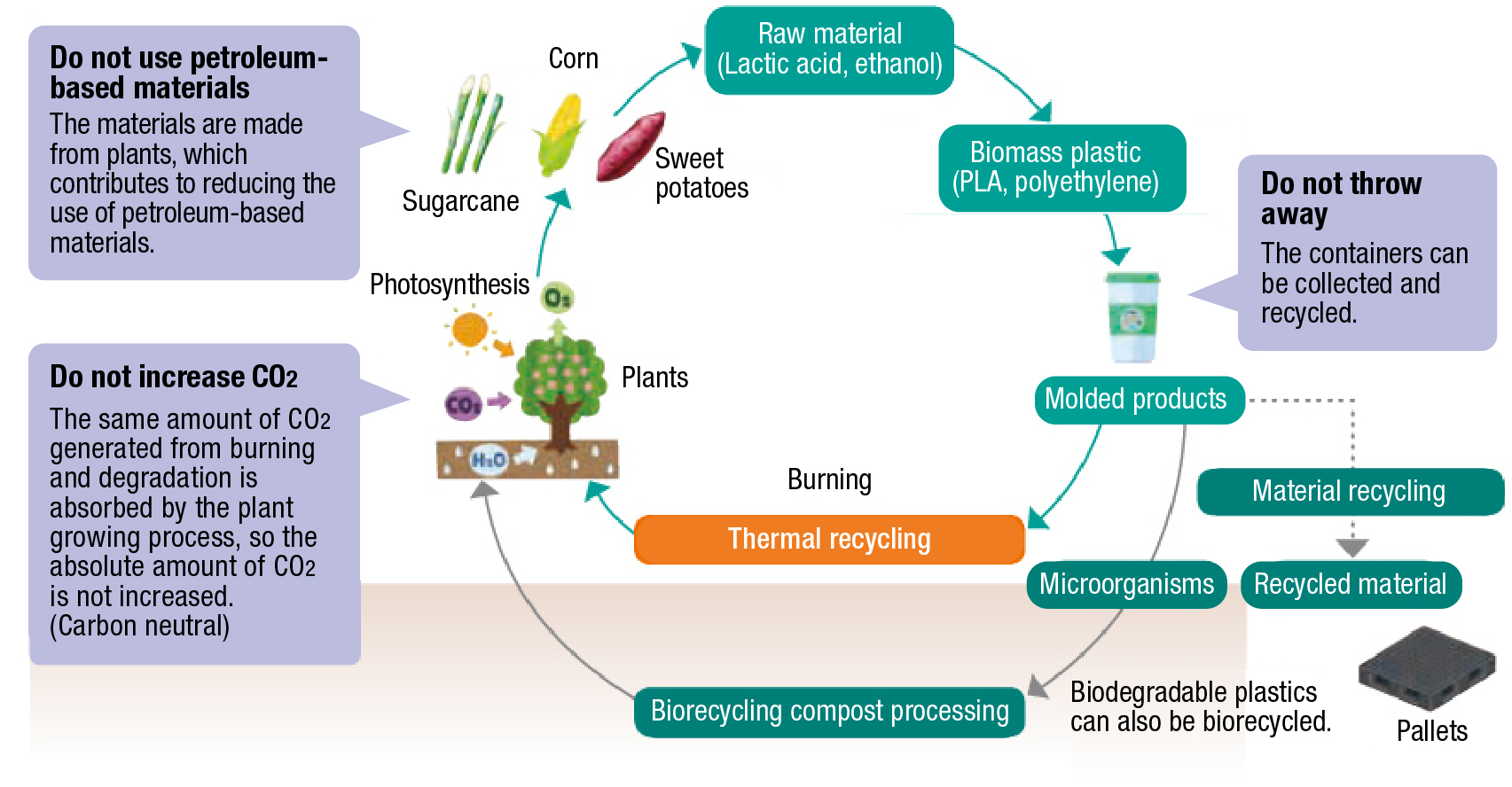 Switching to Side Shrink Packaging

This reduced the amount of plastic material used by 541 tons; resulting in a CO2 reduction of 1,934 tons (compared with conventional wrapping film). Side shrink packaging also has the advantages of making it easier to see the product and being easier for everyone from the elderly to children to open. 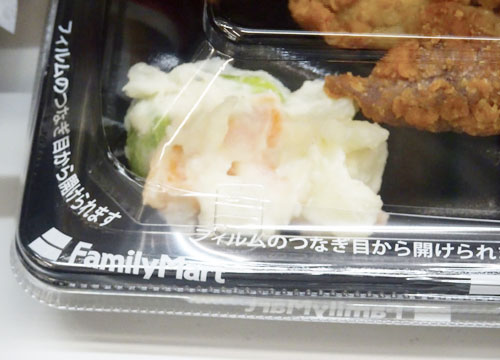 Use of Low-polluting, Low-fuel Consumption Vehicles

FamilyMart was the first company in the convenience store industry to use Compressed Natural Gas (CNG) and hybrid vehicles. Since then we have actively worked to use low-polluting vehicles to deliver products to stores. Today, our environmental performance has been significantly improved and we are implementing the comprehensive use of fuel-efficient diesel vehicles that pass the latest exhaust gas regulations to further reduce emissions of CO2 and other exhaust gases. 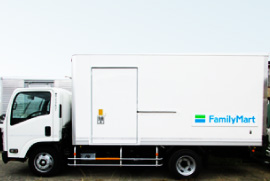 FamilyMart uses dual-compartment refrigerated trucks in which chilled products (kept at 3℃ to 8℃), such as milk and desserts, and fixed temperature products (kept at 18℃ to 22℃), such as prepared lunches and bread, can be loaded at the same time to improve delivery efficiency and reduce the number of vehicles used. Further, these trucks are regularly maintained to keep them in top condition to ensure product quality is kept in its desired state during delivery.

The temperatures in the front and back compartments can be set for their respective products and the space used for each compartment can be adjusted to match the amount of freight being loaded.

To ensure that general and industrial waste collection is conducted properly in accordance with the Wastes Disposal and Public Cleansing Act, we regularly exchange information with the waste and used edible oil collection contractors to improve food recycling activities and resolve operational issues at stores.

FamilyMart has built a system for simultaneous delivery of products kept at each temperature range to deliver products more efficiently to stores. The products produced at multiple commissioned plants and at producers are first transported to a distribution center. The distribution center then performs batch shipment to individual stores to reduce the number of vehicles used. 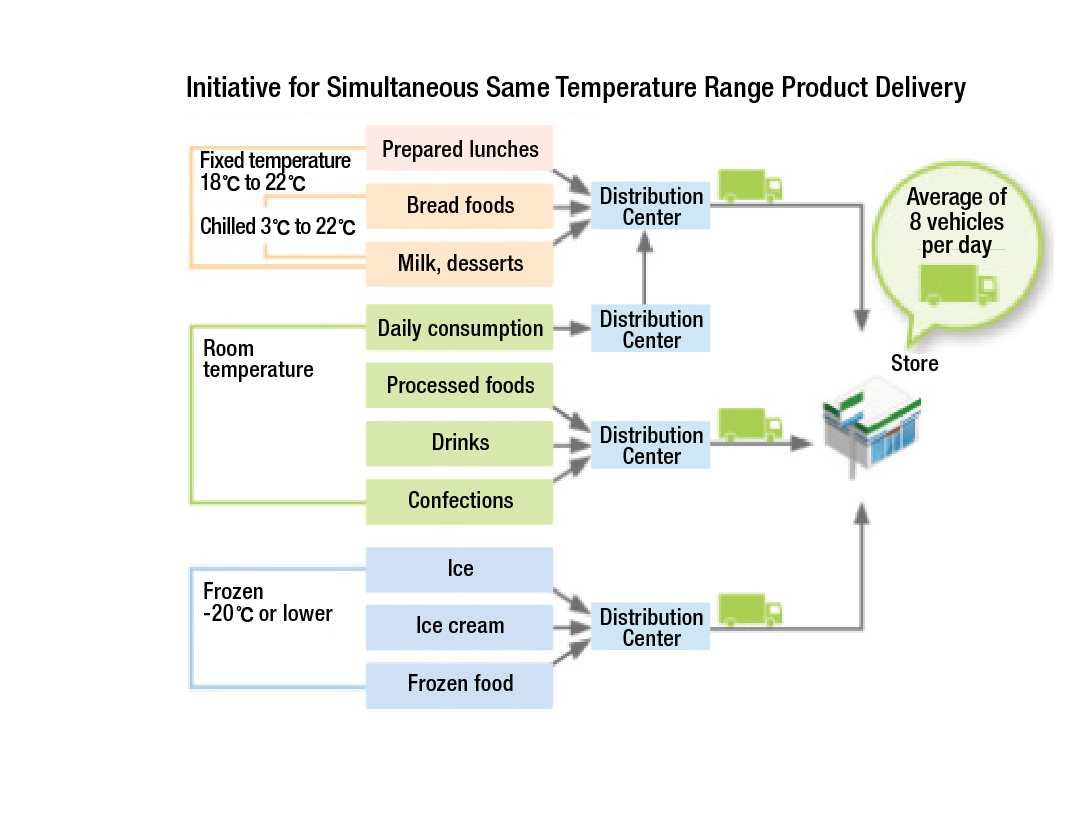 Chlorofluorocarbon substitutes are used in store refrigeration, freezer, and air conditioning equipment, so we inspect this equipment in accordance with the law to prevent Freon from escaping into the environment. Further, when equipment is discarded, a contractor is commissioned to recover the Freon and carefully control its collection and destruction. We are also installing freezers and refrigerators that use CO2 refrigerant to both reduce CO2 emissions from power generation sources and chlorofluorocarbon emissions.

Transition in Energy Efficient Equipment to the Present

The 10 Energy Saving Points that can be done by stores are used to make store staff aware of costs. 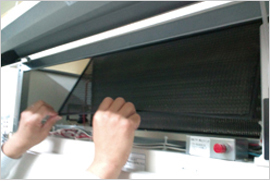 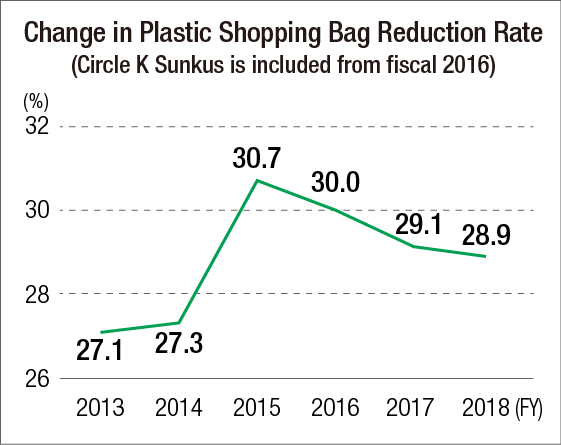 The burden on the environment of greenhouse gases is affected by every step of the supply chain from raw materials procurement, product production, distribution, and sales to disposal and recycling in addition to things that can be directly controlled by FamilyMart. To evaluate the environmental burden of our operations, we calculate the CO2 emissions for the entire supply chain (Scope 3) in accordance with the “Explanation by Industry of Basic Guidelines for Calculating the Quantity of Greenhouse Gas Emissions Throughout the Supply Chain (Retail Industry) Ver. 1.0” issued by the Ministry of the Environment.

Going forward FamilyMart will work to improve the accuracy of data collection, expand the scope covered by our calculations, analyze the calculations, and reduce the amount of CO2 emissions for the entire supply chain.

What is the supply chain CO2 emissions quantity?

This is the amount of emissions for the business’ own operations and those of related business activities.

Direct emissions of greenhouse gases, such as through the use of fuel in the business’ own operations (e.g.: gasoline used by company-owned vehicles)

Indirect emissions of greenhouse gases, such as through the use of electricity provided by other companies (e.g.: electricity used at the head office, offices, and stores)

Breakdown of the Change in CO2 Emissions 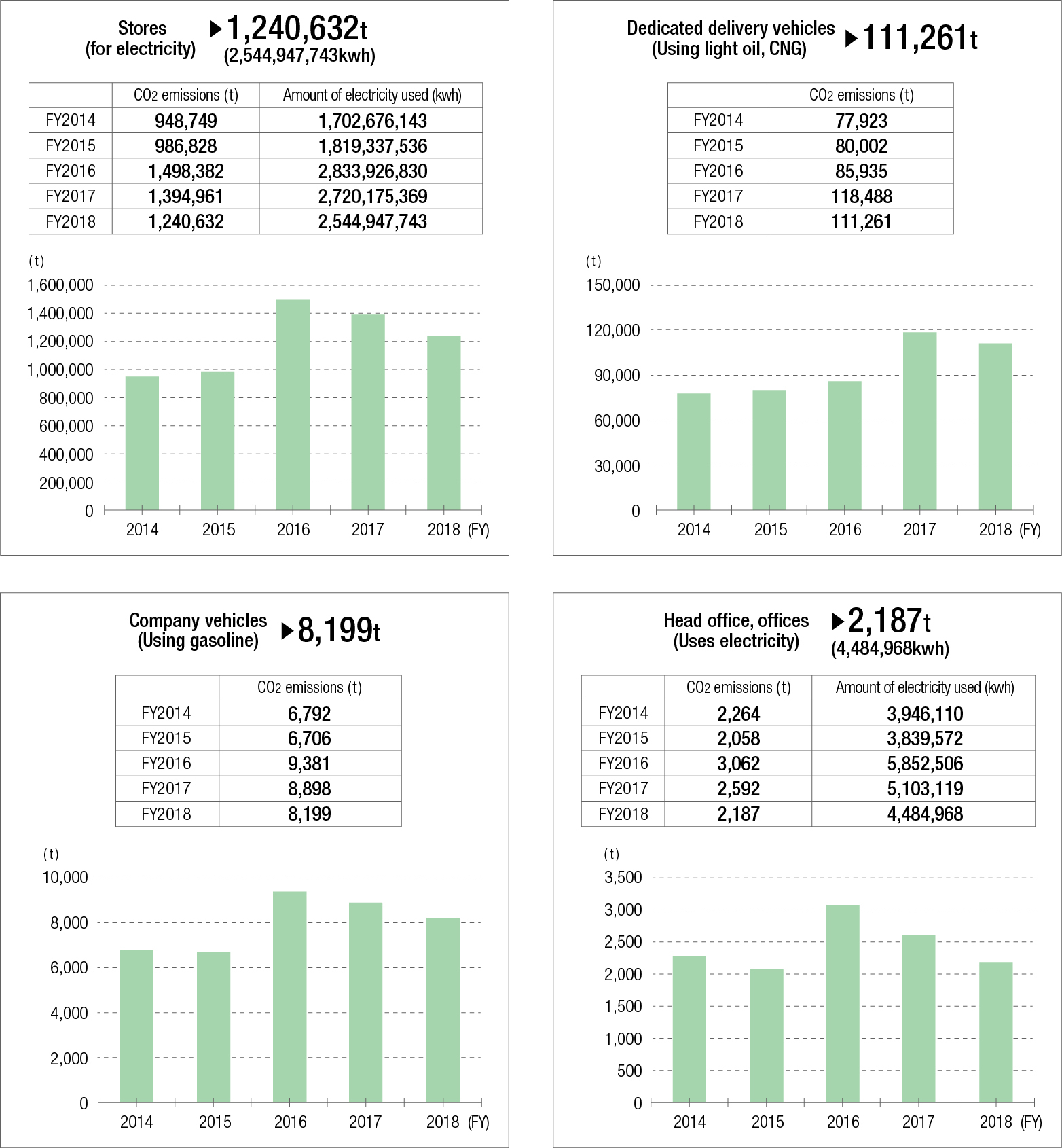 FamilyMart has received third-party verification to correctly evaluate and verify the supply chain emissions quantity (Scopes 1 to 3) calculation results. The greenhouse gas emissions quantity verification for fiscal 2018 was conducted by the Japan Audit and Certification Organization for Environment and Quality(JACO). The results of this audit showed that the CO2 emissions quantity for all stores of officers in Japan and the refrigerant HFC emission quantity for stores were 46,756 tons for scope 1, 1,255,969 tons for Scope 2, and 5,991,602 tons for Scope 3. Based on these third-party verification results we will continue to improve the accuracy of published figures and increase the level of trust both inside and outside the company. 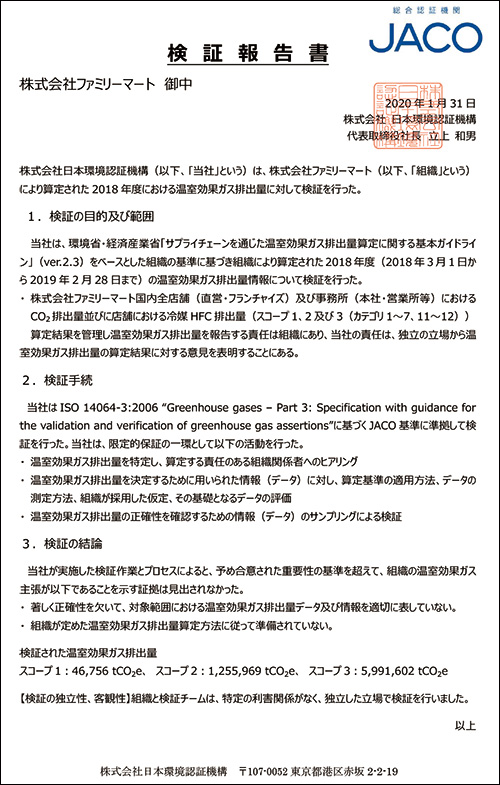 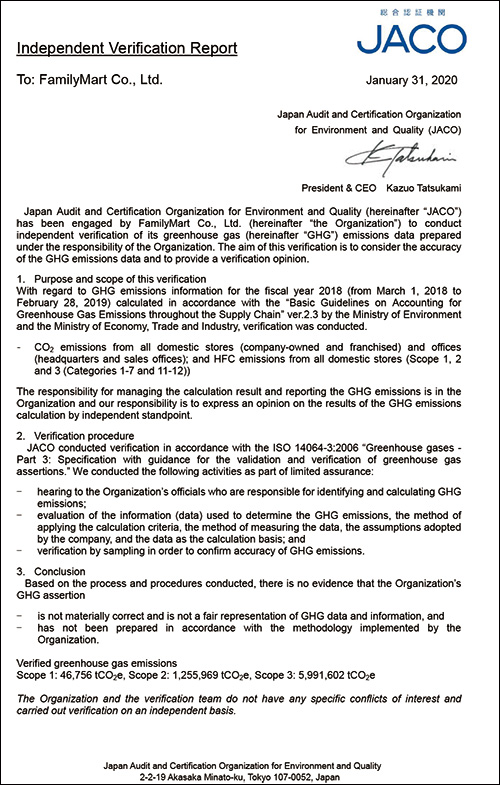 As of the end of February 2018, we have installed solar panels on the roofs of 2,084 stores to both utilize store infrastructure and reduce the burden on the environment. Excess electricity is sold to the power grid. Going forward we will continue to reduce the CO2 emissions quantity using green energy power generation. 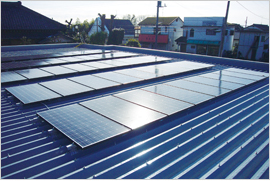 We began converting the lighting in our stores to LED in November 2011. We also installed dimming systems that divide the store interior into 5 zones and automatically adjust the brightness in the respective zones. This both improves comfort and conserves energy by, for example, fine tuning the lighting to reduce the brightness of the fluorescent lights when sunlight is coming in and adjusting for differences between daytime and nighttime.

In 2004, FamilyMart was the first convenience store to install façade signs that use LED lights. Since then we have increased the number of stores installed with these signs and have conducted technical development and verification testing to achieve even more energy efficient LED signs. Currently, we have achieved energy savings of approximately 70% compared to conventional fluorescent light signs.

Installation of LED lighting for our parking lots began in February 2013. The power consumption was decreased to 80w from 245w for the ceramic halide lamps installed since 2008. The useful life of the lights also increased from 15,000 hours to 60,000 hours.

Installed at the Matsuyama Interchange Store in 2004 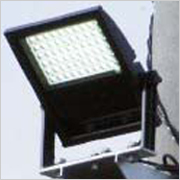 Electric vehicles that do not emit CO2 while traveling have gained attention as environmentally friendly automobiles and their use is increasingly annually. However, there are not enough places to charge these vehicles. To allow electric vehicles to be used without the worry of running out of power, FamilyMart is moving forward with the installation of quick chargers for electric vehicles in its store parking lots.

As of the end of February 2019, the number of installations is approximately 700 stores. 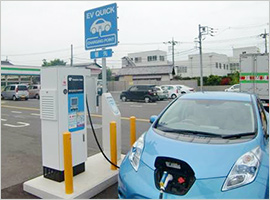 Material Issue 1: Contributing to the Future of the Earth and Its Regions through Environmental Awareness

HOME Sustainability Efforts Regarding Material Issues Material issue 1: Contributing to the Future of the Earth and Its Regions through Environmental Awareness Climate Change Mitigation and Adaptation